Welcome to LBR, please join us, and post your stories and pictures.
Main Menu
Main Menu

Written by Gemini
Views: 269
Rating: 0 (Rates: 0)
Remembering Arthur, Harry and Jack.
We remember the Fallen but we must also remember the brave that returned whose lives were never the same.

My Uncle Jack was a "Railway Man" forced to build the Burma railway by the Japanese as a POW. Most of his comrades died of starvation or disease but he was one of the "lucky" survivors. He returned a skeleton, and suffered ill health and fevers the rest of his life.

Uncle Harry was also a Japanese POW and never really recovered from the experience. Mentally scarred he lived with his Mother, and like many POWs used to hoard food under his bed.

And wives suffered too. A sweet neighbour, Dora, loved children and her eyes would mist over when seeing a baby. That joy was denied her and her husband. Sent to War shortly after they wed, he was injured and returned minus his manhood.

But most of all I remember my Dad, Arthur. He was in the Royal Army Medical Corps and his task was to dodge enemy fire and rescue the wounded. Many had to be carried or taken by mule down mountains as he was in the Battle for Monte Cassino. One of the bloodiest battles with loss of life in the War. He never talked about it but suffered nightmares for years about men blown to bits and dying men begging for a sip of water. As water was scarce it was rationed and only supposed to be given to those expected to survive.

Knowing Dad sure he did what he thought best at the time. Whilst in Rome on leave all the soldiers queued up to see a famous fortune teller. They all wanted to know if they would survive and return to loved ones.

Dad was told he would go home, all limbs intact, marry a dark haired girl from across the water and have two daughters. Although he would never be rich he would have a happy life. She also said in later life he would know his time was up when two babies came into his World. Thinking this was all made up he returned to the fortune teller some months later.

Unrecognised as she had seen thousands of soldiers by then, she read his palm and repeated the exact story.
After the Liberation of Rome, the War ended and he came home to Leicester. There was no counselling then for PTSD you just got a job and got on with life.

He got a job at the BUSMC, married a pretty Irish brunette and had two daughters. I am the eldest and we couldn't have had a better Dad. Noble, kind, handsome, clever and with a lovely gentle sense of humour.

I believe he had a happy life, grateful to have survived the horrors of War.

However I only got to hear the above wartime story after his death. Which was shortly after I had given birth to twins. 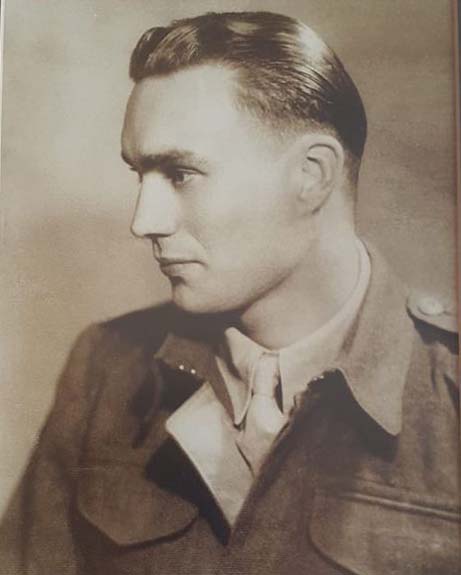